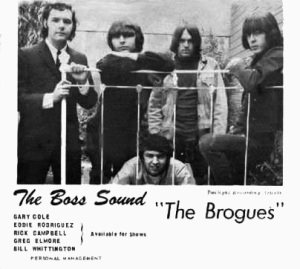 The Brogues were a Merced  band formed in 1964 and split in 1965.  The members Gary Grubb (better known as Gary Duncan) and Greg Elmore later formed Quicksilver Messenger Service in San Francisco.

The other members of the band were Eddie Rodrigues on guitar, Rick Campbell on organ and Bill Whittington on bass.

Bill Whittington then teamed with Bob Segarini from Stockton to form The Family Tree.

Proving my theory that Merced is the center of the musical universe Quicksilver and The Family Tree played the very first, third and fourth Bill Graham Fillmore Shows starting in April of 1966.

The Brogues recorded only six songs: a demo session for “Someday” and “Journey”, and two released singles “Someday/But Now I Find” and “(I Ain’t No) Miracle Worker/Don’t Shoot Me Down.”

“(I Ain’t No) Miracle Worker” is their best known song; it has been included in the compilations Nuggets: Original Artyfacts from the First Psychedelic Era, 1965-1968 and Trash Box. 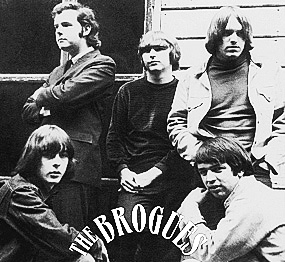