Over the years The Brogues have taken on almost mythic proportions with valley musicians.  A reputation so large it’s hard to believe that they only existed for 9 short months in 1964 and 1965.

That reputation was kept alive by a few great recordings the band left behind.  To this day those recordings represent some of the best examples of 60s “garage band” anywhere.

The records have been in print nearly continuously for 47 years now.

The Brogues were formed in Merced at the end of 1964. The original group members were Bill Whittington, Eddie Rodrigues, Rick Campbell and Greg Elmore. They released only two singles.  The first of these was released twice, first on a local label and then on a national label. The only other known recordings by the group are from a demo that preceded the recording of their first single; an alternate version of Someday and a song called Journey. Gary Grubb (later to be known as Gary Duncan) joined the group in the early part of 1965 prior to the recording of their second single. The group split up in the middle of 1965 after two members of the band were drafted. 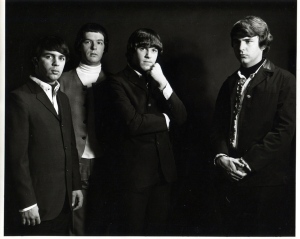 I recently have been in contact with Eddie Rodrigues who was kind enough to contribute information on the band as well as many rare pictures. 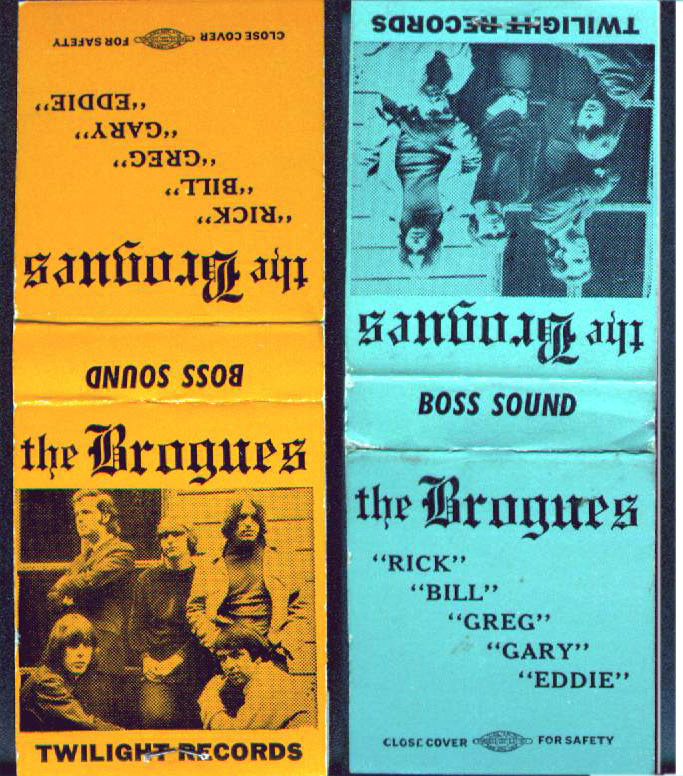 An attempt to recall The Brogues of 1965

BROGUES LEGEND #1: “By the way, that’s not a fuzz pedal, but rather the shredded speaker cones of Eddie’s Amp” on the Miracle Worker recording.

RESPONSE:  The speakers in the 1964 Super-Reverb were just fine.  The Fuzz came from a Gibson Maestro Fuzz Tone (Purchased at Record Rendezvous from Wally Coats) that was set on “beyond intense & screw feedback stability“, a setting on the Maestro Fuzztone that wasn’t that hard to find.  The 1962 Gibson SG Les Paul helped too.

RESPONSE:  What Stage Show?  The band just acted “hard, somewhat depressed and somewhat punk”.  With the teenage crowds being what they are, the “act” seemed to work pretty well and still does to this day for current bands.

(Actually, I don’t think that Greg Elmore and Gary Duncan were acting!)

BROGUES LEGEND #3:  “The band did a couple of shows in San Francisco“.

ADDITION TO LEGEND:  My actual favorite gig of all times was at a Wine House in North Beach in San Francisco that normally featured non-amplified live folk music and had a large acoustic-loving following to match.

While setting up Amplifiers & Drums at the Wine House, we were thoroughly BOO’ed by the Folkies because we had the audacity to bring evil amplifiers into their acoustic domain. However, after about 5 minutes of English-Style R/B we had them screaming & dancing.  The crowd went very  visibly from the “We Hate You – Please Die” Mode to the “We Love You – Let’s Party” Mode during those 5 minutes.  That night we actually saw 1950’s “Pre-Hippy, Beat-type”  San Francisco people dancing on top of little round bar tables while screaming like crazy people.

FACTOID 1:  Miracle Worker & Don’t Shoot Me Down were recorded at Sunset Recorders in Los Angeles where the Stones had just finished recording.  I don’t know about the other guys, but I was pretty impressed about being there.

FACTOID 2: On “Miracle Worker” the rhythm guitar playing was double tracked – I think they used an  8 track recorder on 1-inch tape.  The original rhythm track was sort of  a “Byrd’s” jangle rhythm thing. The interesting part is that the second rhythm track line added was my response to the Producer asking “could you put some Stones Satisfaction  Fuzz Stuff on a Track?” The Producers actually sang a “Suggested Fuzz Tone Line” to me that they were thinking about and I got to tweak and implement it.  Welcome to the World of Record Producing. 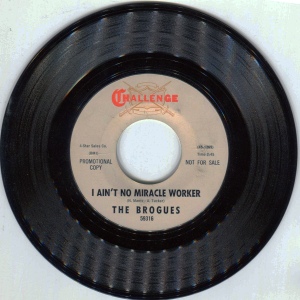 THE TIMES:  The few months that The Brogues were together seemed to be during the last gasp of the Happy Days Period.  Merced-Atwater kids came to our events to find other Girls/Boys, Dance, Show-off  their Cars and Act Cool.  There were no noticeable drugs at those events, not a lot of alcohol, very few (if any) fights and certainly no air conditioning which was pretty amazing at the ITALO HALL with about 450 kids packed in there.  Ticket cost:  1 U.S. Dollar.  It was a pretty pure time.

AN APOLOGY:  I would like to apologize to those Los Banos High School Farm Boys who took umbrage and offense to “The Brogues Band Appeal”, an appeal which apparently positively affected at least some of the local high school girls during a Los Banos FFA Dance where The Brogues performed in 1965.

After the event, as retribution for our perceived affect on their hometown girls, those farm boys chased us out of town in what was probably their Mom’s car and wanted to fight. I think our long hair and Beatles boots made them obsess.

Three of the Band Members, Rick Campbell, Greg Elmore & myself, were in Rick Campbell’s white 1960 Chevy El Camino pickup and were pursued down Hwy 140 just outside of Los Banos going towards Merced by that car full of Los Banos Farm Boys.  They were hanging out of the car windows indicating quite forcefully that they wanted to “go at it”.   It was side-by-side vehicles at about 70 MPH down 2-lane Hwy 140 with a Hammond organ, a Leslie Speaker and Guitar amps in the back the flying El Camino.

Just when I thought we were doomed, Rick Campbell who was driving, apparently decided that the Farm Boys had just pushed him too far (this impresses me to this day) at which time he got a crazed look on his face and veered the old El Camino complete with musical equipment left towards the other vehicle.  The Los Banos boys responded by also whipping their car to the left where they subsequently went off the road, through a barbed wire fence and out into an alfalfa field at 70 MPH!  The last we saw of them was in a giant cloud of dust, their presence marked only by their headlights going up and down as they crossed the 9 inch tall raised levies in the alfalfa field.

So Sorry Boys – Hope Mom & Dad didn’t get too excited about the car!

BROGUE ROOTS:  I re-listened to “I Ain’t No Miracle Worker” today and it’s clear to me at least that  influences on this “almost made it” record came from one of the finest bands  produced in Merced – The Merced Blue Notes.  The general groove, drive and “pop” of the song is very “Blue-Note derived.  Four of the five members of this band were Merced Blue Notes fans.  You’ve heard nothing unless you had the pleasure of hearing the full 1960’s Merced Blue Notes in Stockton complete with Horns and Female singer doing “If You Should Lose Me” through Chief Coolures rather advanced for the 1960’s sound system.  It was Amazing!

BROGUES CREDO:  Never stand around acting stupid and talking between songs.  The average attention span of concert participants between songs is about 6 seconds max.  In order to keep true to this “credo” and keep the dance floor hopping, I trained myself to lock into the tempo of the next song up while we were still a few bars from finishing up the current tune.  Yes, that would be two songs playing in my head at the same time.

We had song lists taped to the floor and as the continuity task-master, I counted off the songs and provided very little rest between numbers.  You could feel the excitement from the dance floor when we cut from one song to the next.

Well, there you have it.  My attempt to remember The 1965 Brogues.

21 thoughts on “The Brogues”